The following information is for those who know astrology and refer to two original techniques.

The house system we use is called "Dimitrios" after the one who invented it. In this system, the 10th house is the whole zodiac sign in which the Midheaven is placed. The next zodiac sign is the 11th house, and so on. For example, in the horoscope below, the Midheaven is at 12 degrees Scorpio. 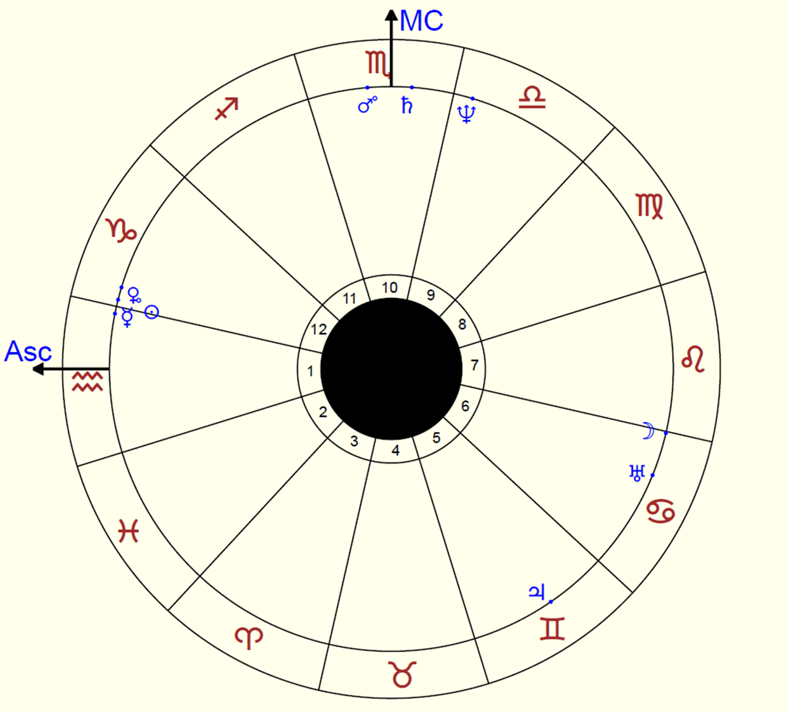 Thus, Scorpio is the 10th house. Aquarius is the 1st house, and the Ascendant is at 12 degrees Aquarius.

FORECASTING TECHNIQUE: The Cycles of the Distant Planets.

This technique is ours and is used only by this website. The distant planets are Jupiter, Saturn, Uranus, and Neptune. The planet's Cycle starts with the planet-Sun conjunction and ends at the next conjunction. It lasts a little bit more than a year. During the cycle, if the planet forms a favorable aspect with some critical points of the natal horoscope, then the cycle is favorable, while if it forms a challenging aspect, it is a challenging cycle. The favorable aspects are the Trines and, in some cases, the Conjunctions. The challenging aspects are the Squares, the Oppositions, and in some cases, the Conjunctions. If the planet forms more than one aspect during the cycle, we prioritize conjunctions, then to oppositions, to trines, and finally to squares. The critical points of the natal horoscope are always the Ascendant, the Sun, the Moon and in the case of Career and Finances the tenth house cusp, in the case of Love and Marriage the Venus.

ADDITIONAL FORECASTING TECHNIQUE: The transits of Jupiter and Saturn through their natal houses.

This technique is well known. Whenever the planets Jupiter and Saturn come full circle and transit through their natal houses, the affairs of life governed by these houses become more active. Thus, a cycle in a person's life ends, and a new one starts. Jupiter takes one year to cross the house while Saturn 2.5 years. During these periods, the individual experiences the favorable or challenging effect of these planets.